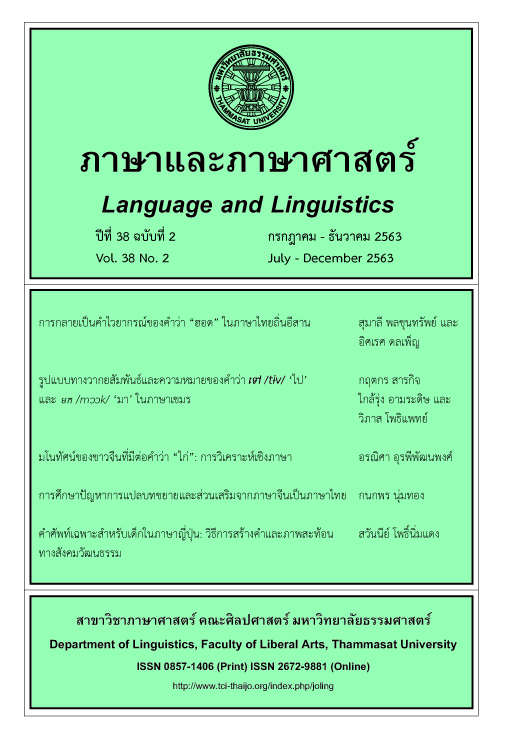 The purpose of this research is to study the problems of attributives and complements when doing translation from Chinese into Thai, which is one of the most crucial problems that cause meaning differences between the translated version and the original version. These problems occur with both new translators and professional translators. The research methodology involved collecting translation issues in the translation work from the students in a Translation and Interpreting Course in addition to translation work that the researcher has examined as a translation editor. The researcher presents the research results by dividing the attributives’ translation into nominal attributives, adverbial adjuncts, and complements based on Chinese grammar. The results show that the translation of sentences with nominal attributives, adverbial adjuncts, and complements from Chinese to Thai can be difficult, in the case of complicated attributives, multiple attributive units appeared at once or involved the use of difficult vocabulary. In the case of complements, the translators have to be careful about the analysis and language usage, and also should not directly translate from Chinese into Thai because it would make the meaning inaccurate. This research proposes a way to handle the problems with three steps: the translator should understand the true meaning behind the language and the language structure well, "deverbalize" from the original language structure, and rearrange into a communicable language in the translated version. However, the translator who can achieve these steps must possess a good grammatical foundation in both languages and regularly practice analyzing and transferring meaning across languages.

How to Cite
Numtong, K. (2020). The Study of Translation Problems of the Attributives and Complements from Chinese to Thai for Developing Chinese to Thai Translation Skills. Language and Linguistics, 38(2), 89-105. Retrieved from https://so04.tci-thaijo.org/index.php/joling/article/view/244644
Issue
Vol. 38 No. 2 (2020): ปีที่ 38 ฉบับที่ 2 (กรกฎาคม - ธันวาคม) 2020
Section
Research Article