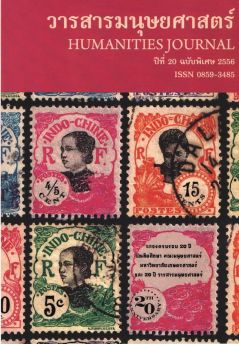 This research aims at studying the meaning of English nicknames used by Thais so as to see how it reflects Thais’ thoughts and ways of life in contemporary Thai society. 665 nicknames were collected from various sources, namely two websites and a book providing lists of nicknames for the public to choose, a collection of posts about nicknames from an internet forum, and a nickname survey conducted by the researcher. The collected nicknames were analyzed based on the concept of global cultural flows proposed by such globalization theorists as Appadurai (1990; 1996), Hannerz (1991; 1992), Robertson (as cited in Scott, 1997 and Inglis and Thorpe, 2012), Tomlinson (1999) and Crane (2008). The findings of the research reveal that there is a relationship between the meaning of English nicknames and the construction and manifestation of Thai identities in the contemporary Thai context. More specifically, what Thais seek from English nicknames is not only “labels”, but also images of people in modern society. In other words, Thais expect from the nicknames a sense of seizing the opportunity to identify themselves with a modern global society. However, in the naming process, there is hybridization and transformation of English nicknames as a way to negotiate and assert Thai identities in global cultural spaces. Hence, Thais are not mere receivers, but also act as active agents in the process of global cultural flows.