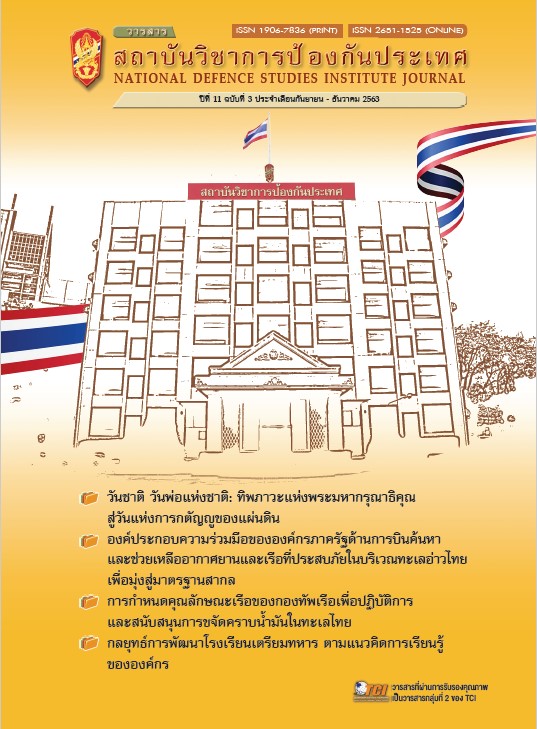 This research aims to study reasons of need for works, manner of jobs, difficulties in finding a job after retirement for Royal Thai Army officers and to examine factors that have influenced them to work. A technique used for analysis is Structural Equation Modeling (SEM) in AMOS Program from 215 samples including 21 commissioned officers and 194 non-commissioned officers.

The findings reveal that 54.52 percent of retirees seek post-retirement work because they want to earn additional income for their family. 37.21 percent think that they are still healthy and fit for work while 18.06 percent would like to spend their time beneficially. As for the reasons why they have no desire to work after retirement, resting ranks first followed by health issue, lack of household income burdens and sufficient income for themselves and family members. Jobs that most of the retirees are interested in is farming, accounting for 38.60 percent, the second is merchant at 18.06 percent and consulting/administrating work at 15.35 percent. In terms of general and specific services, taxi and motorcycle taxi share the same rank at approximately 13 percent. The retired officers can be divided into two groups considering work option. The first group includes commissioned officers who tend to select cognitively challenging jobs; for example, consulting and administration, and teaching while the second group is non-commissioned officers who are likely to aim for physically demanding jobs, e.g. labor work, merchant, etc. Farming is the job that retirees from both groups have advance plans and execute them before their retirement such as purchasing the land. For problems and obstacles in the post-retirement work, 31.63 percent of the samples state that their family members do not support the post-retirement work while 29.77 percent reveal that they have poor health. Meanwhile, 17.21 percent suppose that they might not be employed by any organizations, and 13.49 percent admit that they are unable to adapt themselves to new technology. Additionally, 12.56 percent agree that the working hours are inflexible; 9.77 percent assert that they lack knowledge and capability; and 6.98 percent express that they lack capitals.