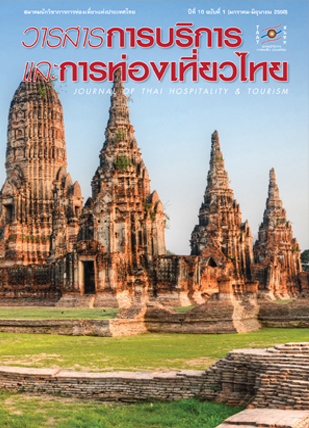 The research on “The Effect of Destinations Sustainability, Motivation and Attitude on Tourism Behaviors at Monasteries in Ayutthaya District”, was aimed to (1) compare tourism behaviors at monasteries in Ayutthaya District, categorized by individual characteristics, (2) study the effect of the sustainability of tourism destinations, tourism motivation, and attitudes on tourism satisfaction and loyalty towards monasteries. This research methodology was quantitative research; the sample of this research included 400 Thai tourists. The questionnaire was used as a tool for data collection with a reliability coefficient of .952. The statistics used for analyzing data comprised percentage, average, standard deviation, t-test, F-test, pairwise comparison by Least Significant Difference (LSD), regression analysis.