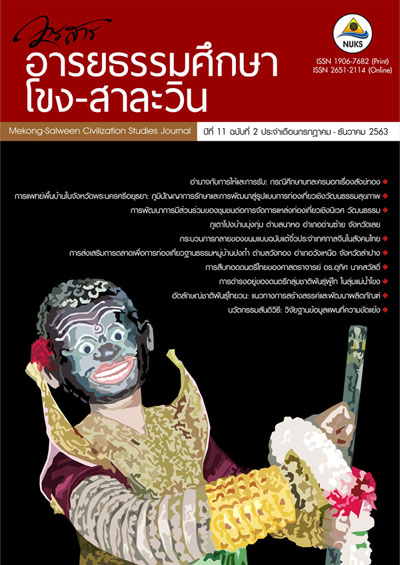 The purpose of this research was to study the existence of Phu-tai ethnic group and the transformation of Phu-tai ethnic music In the Mekong Basin. The researchers employed qualitative research processes by collecting field data. The results showed that 1. regarding the existence of Phu-tai ethnic music in the Mekong River, musical instruments were made from natural materials, such as Pi Phu-tai, Saw bang mai pai, Khan, and percussions. Regarding the band for the yao ritual, the band for entertainment was still the same. For the songs, Laiphutaiyai pattern, and the Laiphutainoi pattern remained the same. 2. Concerning the transformation of Phu-tai ethnic music in the Mekong River, the instrument sat in the same physical and the material used. The only change was the materials used to make the tongue of Lao reed mouthorgan and Pu Tai Bagpipes. Originally, ancient coins were used, but they were changed into silver belts and gold instead. Regarding the band for the Yao ritual, it remained unchanged in terms of the original characteristics. However, the band for entertainment included a mix of western instruments. Besides, there were a music and arts contest of Office of the Basic Education Commission (OBEC), and activities organized by Phu-tai activities at the district level, province level, international level and global level of Phu-tai. Yao’s rituals continued to use traditional music, but only change music for entertainment. Due to the trend of modern music, there was the emphasis on heterophony melody and the harmonies between the band and the Lam sound. The musicians had translated the main melody or the characteristics of the melody, leading to the change of the music of the Phu-tai ethnic group.